The renowned actor and environmentalist Leonardo DiCaprio published on his social networks a request addressed to the Argentinian Congress, asking for the treatment of the bill for the creation of the Ansenuza National Park and Reserve.

Leonardo DiCaprio requested through his social networks to the National Congress the treatment of the bill to move forward with the creation of the Ansenuza National Park and Reserve, he also stressed the global importance of this wetland. This request is in addition to the one made formally a few days ago by Natura International Argentina and Aves Argentinas.

In August of this year, a Provincial law was obtained by unanimous vote of the legislature of the province of Córdoba. Now, the urgent request is the approval of the National Law that will allow the creation of the Ansenuza National Park and Reserve. Having this protected area is of vital importance to ensure the conservation of the wetland formed by the Mar Chiquita Lagoon and the marshes of the Dulce River, a key site for the conservation of biodiversity at a global level and one of the most important wetlands in Argentina. 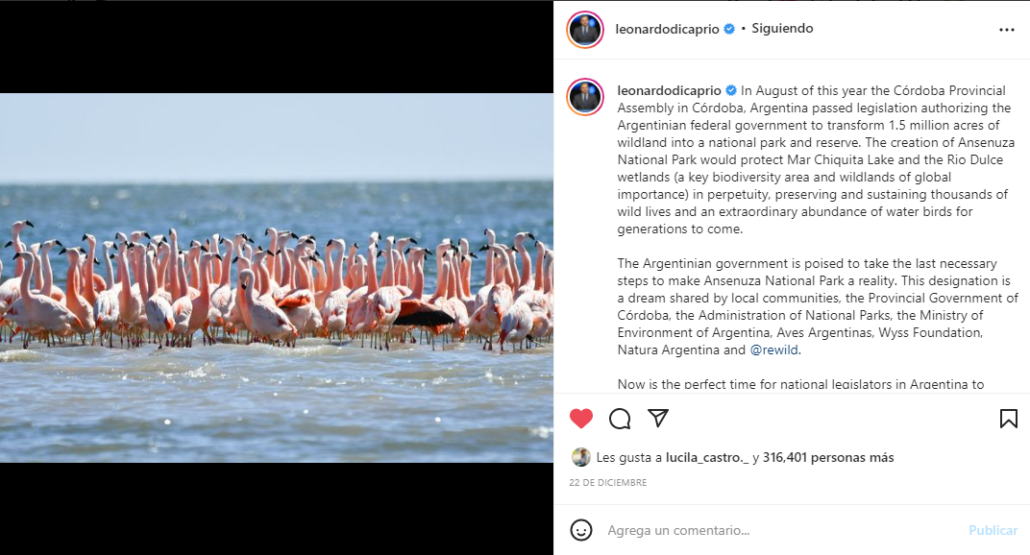 Lucila Castro, director of Natura International Argentina, stated: “The creation of the Ansenuza National Park will allow us to protect and develop, together with its local communities, one of the most important ecosystems in our country”.

DiCaprio’s request states: “The Argentine government is ready to take the final steps necessary to make Ansenuza National Park a reality. This designation is a dream shared by local communities, the government of the province of Córdoba, the National Parks Administration, the Argentine Ministry of Environment, Aves Argentinas, Fundación Wyss, Natura International Argentina, and Re:wild,” emphasizing the importance of working together to achieve great goals.
“This is an excellent opportunity for the Chamber of Deputies to give us great news to close the year,” Castro pointed out, “since there is a general consensus for the creation of these protected areas, it remains to put it on the agenda and vote on it, which will give us a good reason to start 2022 moving forward in a mission that unites us: the conservation of one of Argentina’s most valuable wetlands.”