Mar Chiquita Lagoon, a saltwater body of water located northeast of Cordoba and southeast of Santiago del Estero, is home to the largest clutch of Chilean flamingos in Latin America in the 2020-2021 breeding season.
Local conservation experts indicate that in recent months more than 300,000 individuals were counted and seven clutches of Chilean flamingos were observed. Flamingo censuses in Mar Chiquita began to be carried out by park ranger and member of the High Andean Flamingo Conservation Group (GCFA) Pablo Michelutti, and continue to this day.
The flights to count the birds are carried out at two times of the year, during the summer and winter. Three organizations collaborate to carry out the censuses: the GCFA, Natura International and the Cordoba Secretariat of Environment. 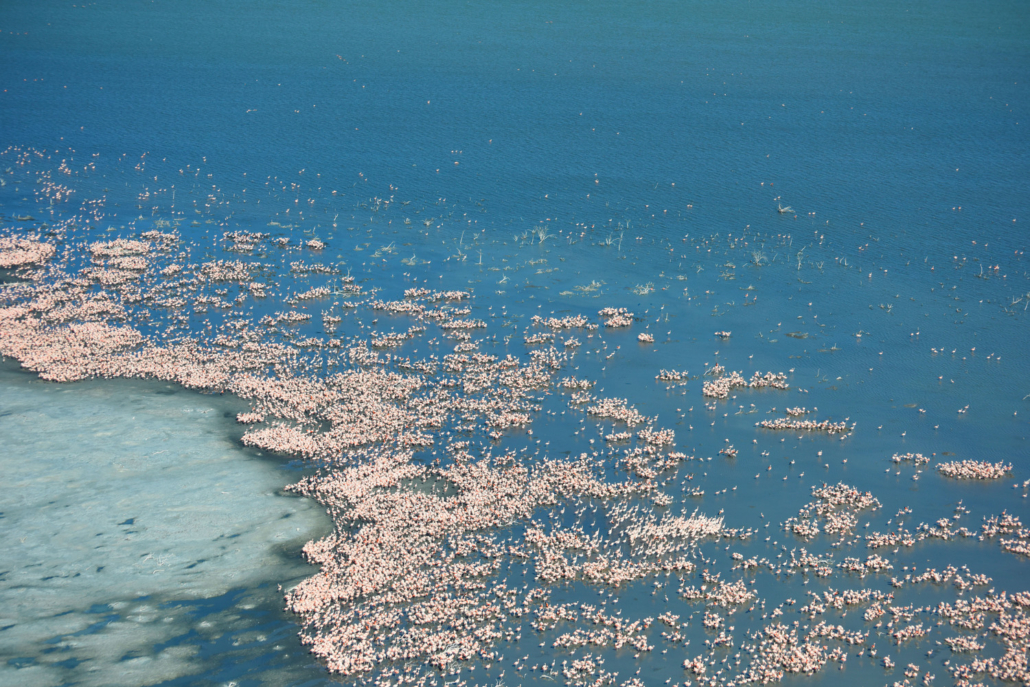 The Mar Chiquita Lagoon and the Dulce River marshes, in addition to being the habitat and breeding place of the Chilean flamingo, are a migration point for the Andean flamingo (or great flamingo) and the Puna flamingo (also called the small flamingo), which is why three species of flamingos of the six existing in the world can be observed in the area. On the other hand, there are approximately 380 species of resident and migratory birds in the area, making the wetland one of the richest in the world in terms of biodiversity.
An adult Chilean flamingo can reach an average length of 100 centimeters, and has long legs and a curved beak, adapted for foraging in the muddy lagoon. They are born with grayish, brownish or white plumage. When they reach maturity, the feathers take on pink tones because the flamingos feed on algae and crustaceans native to the area, which contain pigments. Depending on where they live and the species they feed on, the pinkish hue of the flamingos’ feathers can vary in intensity. 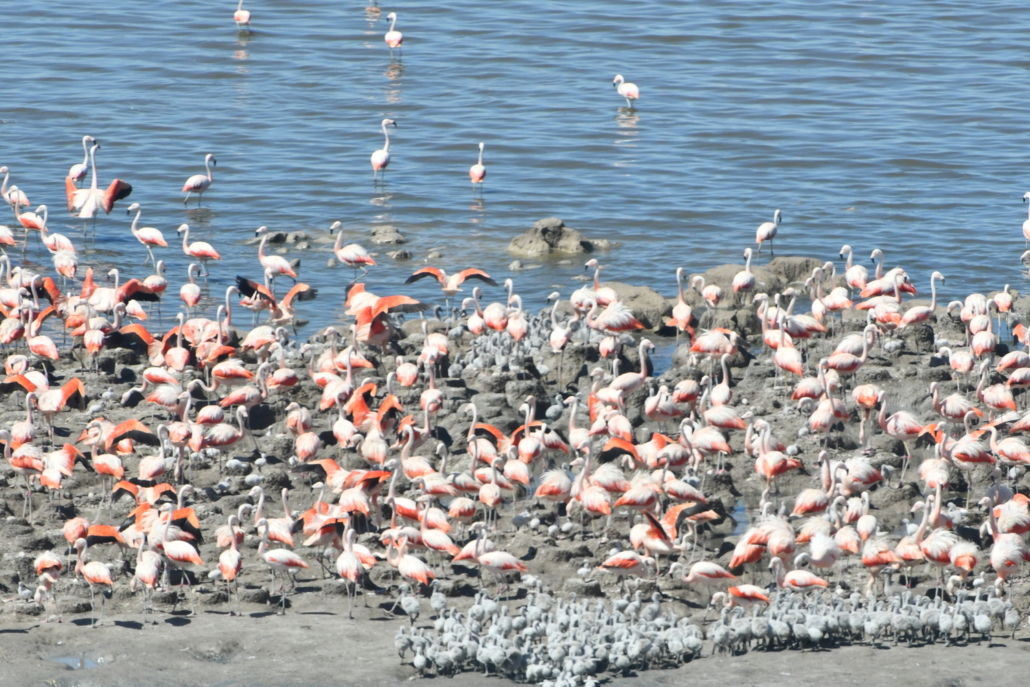 How the censuses are carried out

The Mar Chiquita Lagoon and the marshes of the Dulce River extend over almost one million hectares in northeastern Cordoba and southeastern Santiago del Estero. Aerial surveys are the only viable way, for the moment, to estimate bird populations in such extensive wetlands.

During the flight, a census taker goes to each side of the plane to carry out the photographic survey. Together with the gauging methodology, these images are processed in software and are useful to directly count the number of individuals and which species inhabit the wetland.

Some years, with the arrival of September and the increase in temperature, flamingos congregate in the wetland to begin courtship. There, flamingos of reproductive age gather in groups and perform a dance to attract mates. When they succeed, they mate. 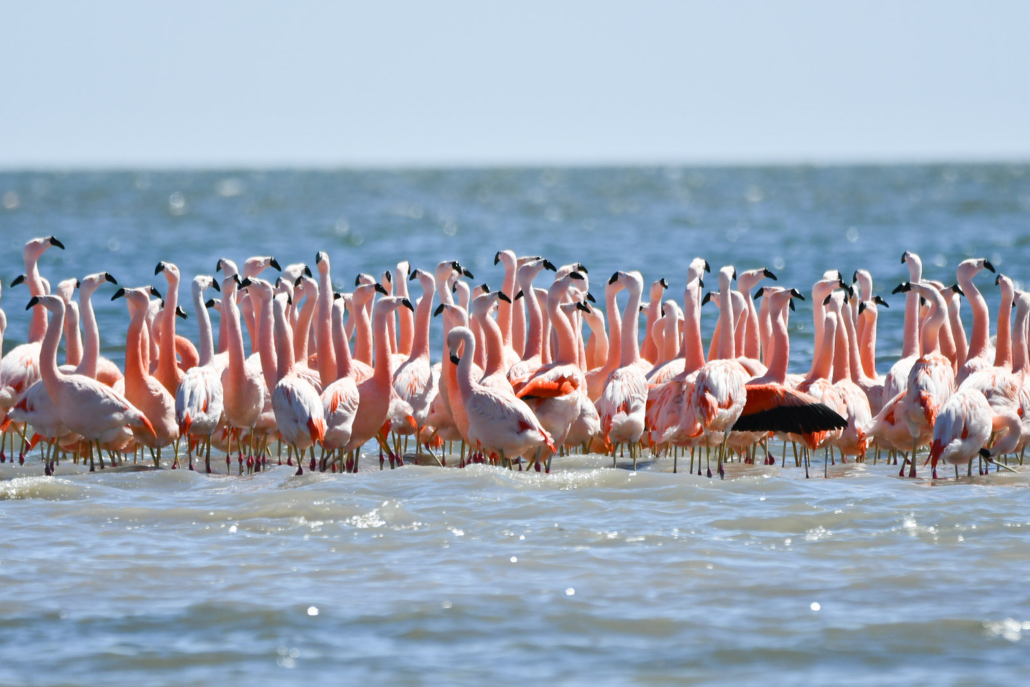 If the process is successful, the flamingo couple builds a nest on the banks of the Mar Chiquita Lagoon, where a single egg is deposited. From there, the couple protects the egg until the chick hatches.
It is of great importance to generate instances of conservation in the sector. According to the IUCN Red List of Threatened Species, the Chilean flamingos are almost threatened, and their population trend is decreasing.
Flamingos are very sensitive birds. If frightened, they abandon the nests en masse, leave the site and leave the eggs and hatchlings to drift away. It is very important not to disturb them so that they can reproduce normally. 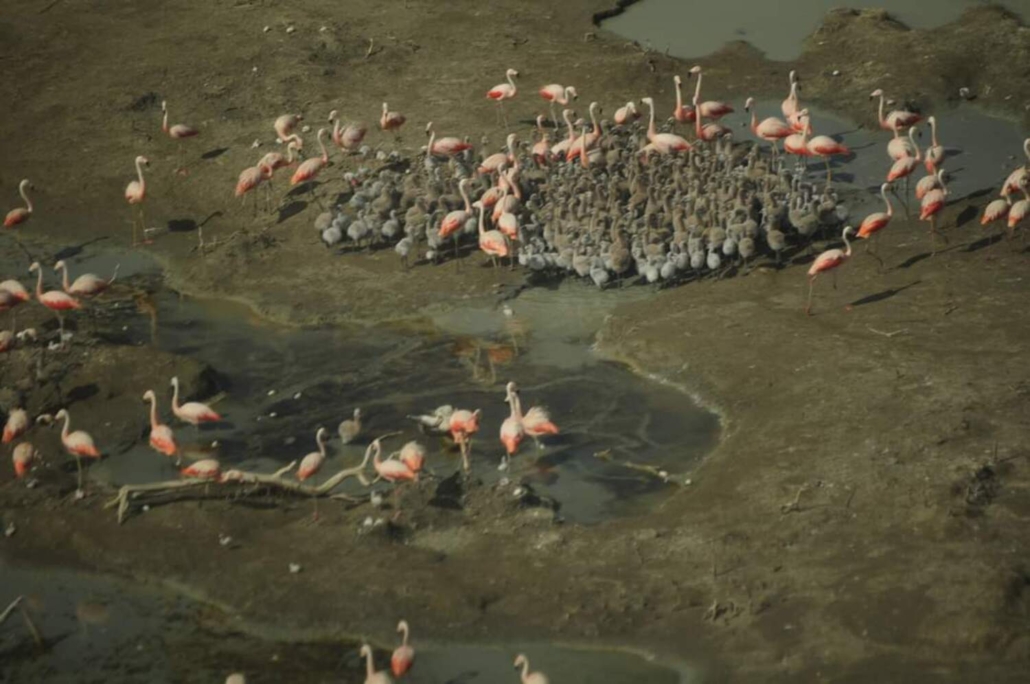 A promise of conservation

The future Ansenuza National Park is nearing its creation. When it is established, the nearly one million hectares between the lagoon and the marshes will be protected under a legal framework, which will contribute to the conservation of these species.
Once the park is created, economic activities can be carried out around it in a sustainable manner, without affecting the local flora and fauna. In addition, with the new protected area, there will be new personnel and a specific budget dedicated to preserving the wetland.
To achieve the creation of Ansenuza National Park, environmental training and education of all the stakeholders involved in the establishment process is essential. In addition, it is necessary to develop agreements that will lead to the changes in land use necessary to create the area.